The making of Take It Racing 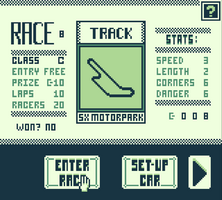 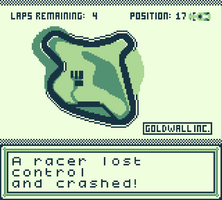 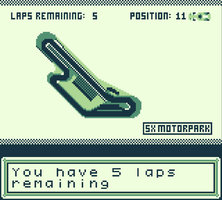 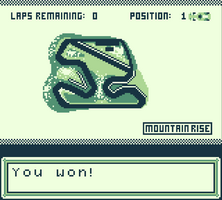 Just over a week to create a game in the style of the Game Boy: a challenge I couldn't turn down! Coming just after the release of GB Studio 2.0 I was extremely excited to begin GB Jam 8.

My previous games using GB Studio were puzzle/exploration games that felt like old Pokemon games. However, with this game I wanted to test my ability to create statistic based games. I've always wanted to make a game about racing, so here it is! Take It Racing!

Take It Racing is a retro racing strategy game made to play like a Game Boy game. 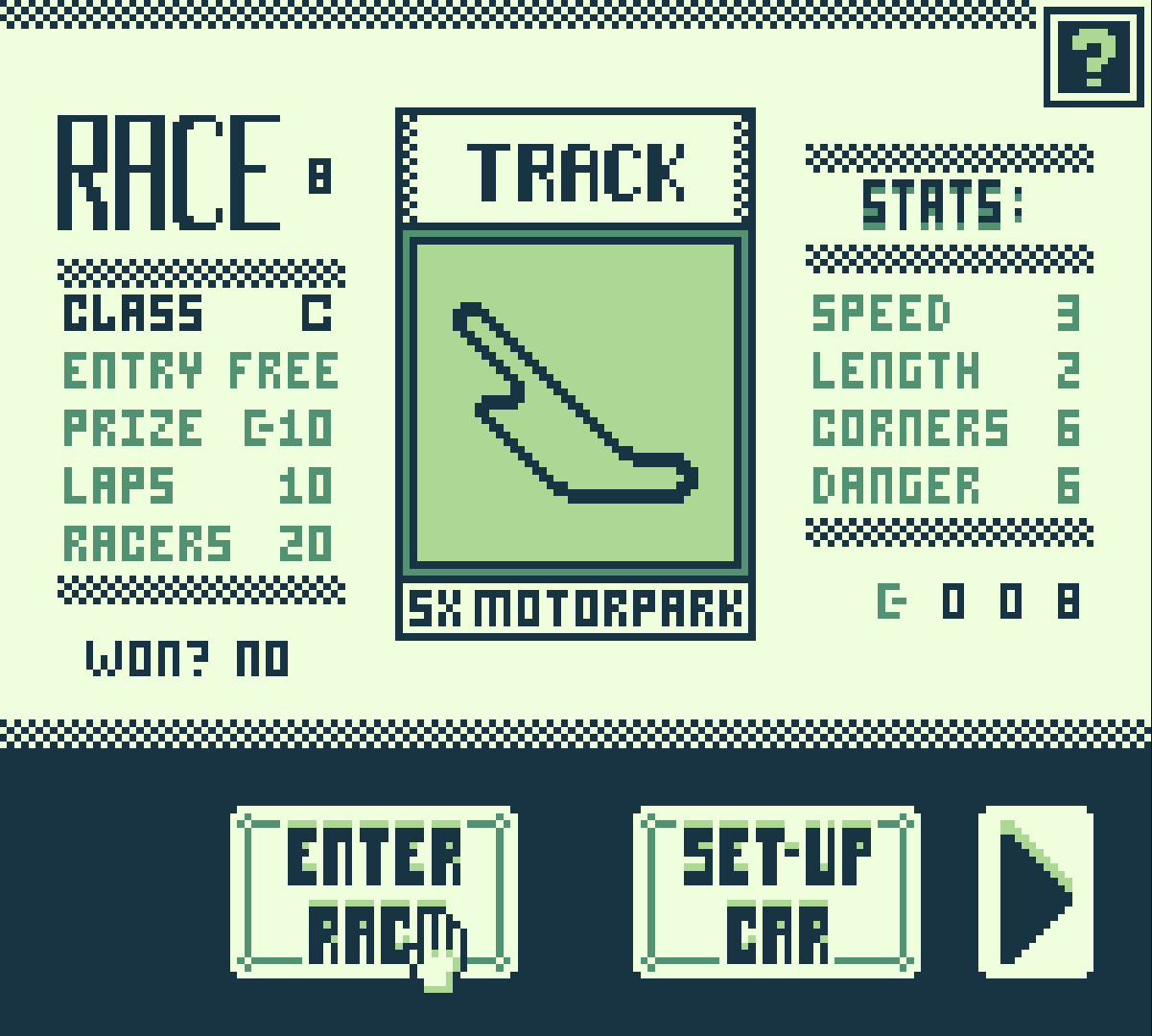 The main thing I wanted from a statistical racing game was the ability to change your vehicle's stats in order to win races. As an artist, I wanted to see what the player was buying to upgrade their vehicles, so each item has a unique sprite and unique stats. Due to limitations, I only implemented 16 different items - but this still gives the player 256 possible combinations! 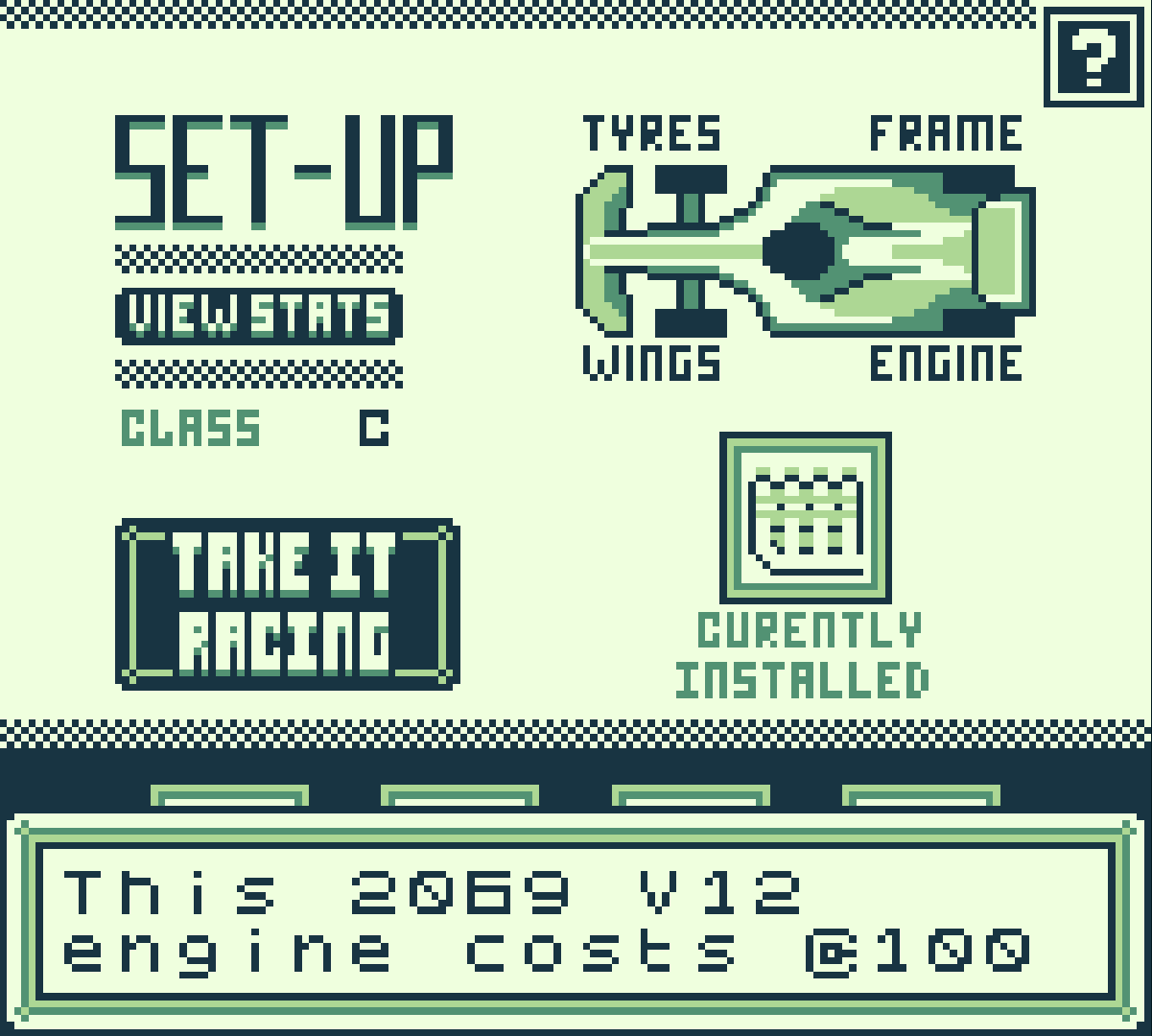 Secondly, I wanted the game to feel like it doesn't punish players for having lower stats. Instead, the stats are compared to a roll of a dice, so even if you have low stats and you are lucky, you can win any race! On the flip side, this means even if your stats are really high, you don't just obliterate your opponents, you move up and down organically.

Finally, I wanted the player to feel like they were at the race. At first this seemed quite difficult since I wanted the cars to be moving around the track. Therefore, I settled on a text based system which rapidly sped up development time: the only graphics I needed to make were background representations of each course. The great characteristic of this system is that as each lap passes, the player's placement is updated, making it feel as though you are weaving through the pack or falling behind. The random chance creates moments for the player to get excited  especially when they jump from 11th to 1st place on the final lap! Another thing I love about the random chance, are crashes. Each race has a danger score, giving the racers a possibility of crashing on each lap. The longer the race, the greater the risk of the player crashing. 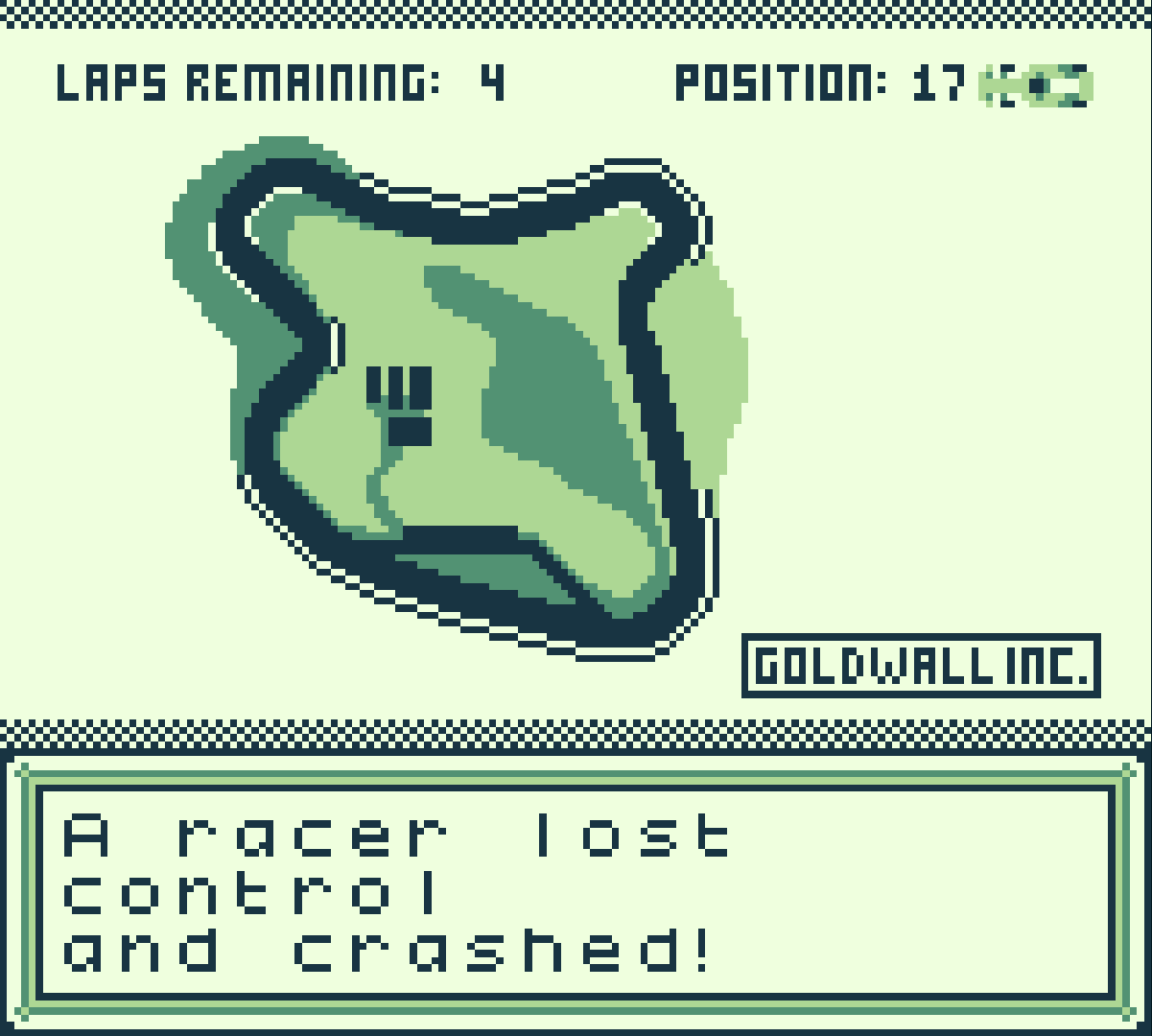 At the beginning of the jam I joined the GB Jam Discord server, meaning I could ask for help and feedback whenever I needed it. It helped me stay motivated as I was also able to see everyone else's games coming along. The reason why I bring this up is because I was also able to meet a musician who wanted to make music for other people! Our cooperation means that Take It Racing is not silent, which is fantastic. In the past, my games felt slightly dead because they were silent.

I would definitely recommend to anyone working with GB Studio wanting to participate in a game jam to join the next GB Jam. Everyone was so helpful and I had so much fun being able to talk to other like-minded people as I worked on my game.

As for Take It Racing, I have polished it quite well but there will still be balancing issues do to the random chance. I will fix any bugs that come to my attention - your save games shouldn't be affected. I made this game for myself but I want to explore the idea further; possibly using Unity in order to have more complex graphics and physical racers that the player is able to influence during the race.

If this sounds like something you'd enjoy, please leave any comments so we can discuss them together!

Get Take It Racing